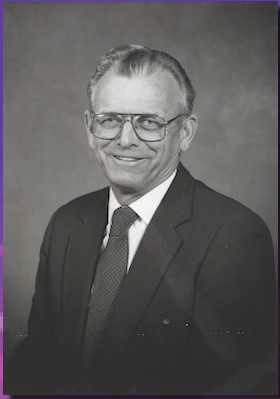 Ernest Johnson was an influential leader in the foundation and growth of PCCA, a past president, father of Past President Greg Johnson, and a friend to many in the industry.

Ernie served on the PCCA Board of Directors, in all the officer posts, and as association president in 1989-90. He and his wife Delores hosted a successful Mid-Year Meeting at the Grove Park Inn, in Asheville, N.C., and their 1990 Convention at the Westin La Paloma, boasted the most attendees in PCCA history (a number that wasn't topped until 1995). 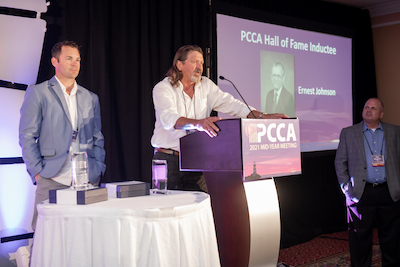 Ernie was born on July 5, 1924, on the family farm in Greenbush Township, Minn. He married Delores in 1947. Ernie graduated from Princeton High School, attended the University of Minnesota for a year, and worked on the family farm with his father until joining Franzen Brothers Construction. He worked as a lineman, building powerlines in Minnesota, South Dakota, Wisconsin, and Iowa. In 1951, he became a partner in the business, which was incorporated as Okay Construction. He remained active in the business until age 70.

Ernie enjoyed having coffee at the K-Bob, fishing, hunting, and gardening. Those who knew him best said he loved to laugh and have fun.

Greg Johnson followed in his father’s footsteps and eventually took over the family business. Greg’s brother Paul and sister Julie contributed to the success of Okay Construction and continue to work in the industry. Greg’s sons Matt and Tate are 3rd generation linemen and continue to build powerlines throughout much of the upper-Midwest. Ernie had great inter-personal skills and business acumen that provided an influential basis and standard for his children, grandchildren, business partners, co-workers, and friends. Ernie always said, “A job isn't worth doing if you are not going to do it well.”