The work ethic and character of individual PCCA members is why this association and this industry have been so successful. 2020 Hall of Fame inductee Ron Tagliapietra exemplifies the qualities of a PCCA Hall of Famer in so many ways.

Tag got his start in the industry right after high school graduation, in 1964, as a laborer turning a cable reel on the first Michels plow crew. He quickly moved up to backhoe operator in early 1965. Michels owned seven backhoes at the time.

Tag's career at Michels was interrupted when he was drafted in November 1965 and volunteered to go to Vietnam. He volunteered and was chosen for officer candidate school, where he was one of 25 graduates out of the 100 candidates who started the program. In 1967-68, he served in Viet Nam as a platoon leader in the 196th Light Infantry Brigade. He survived the 1968 Tet Offensive as a commanding officer. 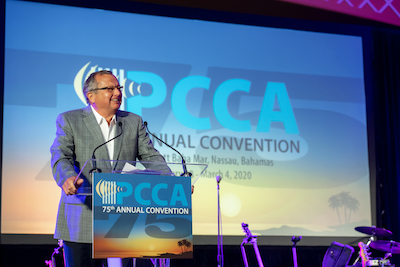 He returned to the United States as a decorated 1st Lieutenant with an offer to reenlist with a promotion to Captain. He considered enrolling in a small college in Wisconsin to get a teaching degree and play football. But Dale Michels ultimately convinced Tag to accept his discharge papers, and he returned to work at Michels the day after he was discharged. Surviving the horrors of Tet Offensive would make the challenges and crises he’d face later in the construction industry seem very easy to solve.

In 1969, the same year he married Bonnie, Tag was promoted to plow crew foreman. Bonnie and Tag have been married for 50 years and have two children, Gina and Tony, and six grandchildren. He moved up to project manager in 1977, general superintendent in 1978, vice president in 1989, and senior vice president in 2008 until he retired in 2014. In 2010 Tag was selected as the first Michels One Senior Manager, one of the company’s highest honors. As Tag progressed through the company, the company grew big time. In 2019, Michels was listed as one ENR’s top 25 contractors in the country.

After Tag retired from Michels in 2014, he wanted to continue working so he took a position with Quanta Services as executive VP for business development. After 54 years in the industry, he retired for a second time in 2018, and it looks like he’s finally getting the hang of it.