After graduating from the University of Notre Dame, Steve Bauchman went to work in the field for his father, Robert Bauchman, one of the founders of PCCA. The elder 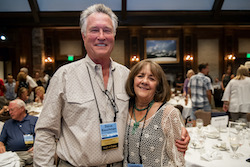 Bauchman believed that the construction business should be learned from "ground up" and "that one's education begins when one's formal education ends.”

The job provided Steve with the opportunity to live and work in most of the country, the Pacific, and the Caribbean. Bonneville Construction entered into a joint venture to construct a telephone system in Guam, where they were responsible from the switch to the telephone. They spent the next 35 years developing systems from the Micronesia to Puerto Rico.

Steve was PCCA President in 1988-1989. "I was introduced to the PCCA in the early eighties and received guidance and advice from many of the early pioneers in the organization," he said. "They recognized the need for young leadership, and I was the youngest member on the Board of Directors for a number of years. My elevation to the presidency was rapid with many of the members going out of business in the recession of the 1980s."

"The industry went through numerous downturns, but with technological changes we as contractors adapted and evolved," Steve said. "The relationships developed along with the guidance of industry provided the opportunity broaden our business from the many aspects of power and communications to security systems, computer networks, and operating of cable systems."

Steve was also instrumental in growing PCCA's Mid-Year Meetings. "Prior to my term as president, Mid-Year Meetings were held in Washington, D.C., to consult with government officials," he said. "Believing that greater participation and a more relaxed setting would work, we held a Mid-Year at Jackson Hole, Wyoming, that included wives and families." And the rest is history: PCCA now holds its Mid-Year Meetings in great locations all around North America.

Steve and his wife, Lyndella, have three children and ten grandchildren, and they currently reside in central Idaho "on the edge of the largest wilderness in the lower 48," where they are in the cattle business. "I’ve been fortunate to be married for 44 years to Lyndella, who spent many years living on the road and raised three children while I was gone most of the time. Being a part of the association has allowed us to develop not only critical business relationships but lasting friendships."