PCCA inducted Steve Spears into the PCCA Hall of Fame on March 7, 2015, during the 70th Annual PCCA Convention in Aruba.

Steve Spears, President of Bonneville Contracting & Technology Group, Hato Rey, Puerto Rico, served as PCCA President in 2003-2004, was a longtime Board member, and will long be remembered as the driving force behind PCCA's 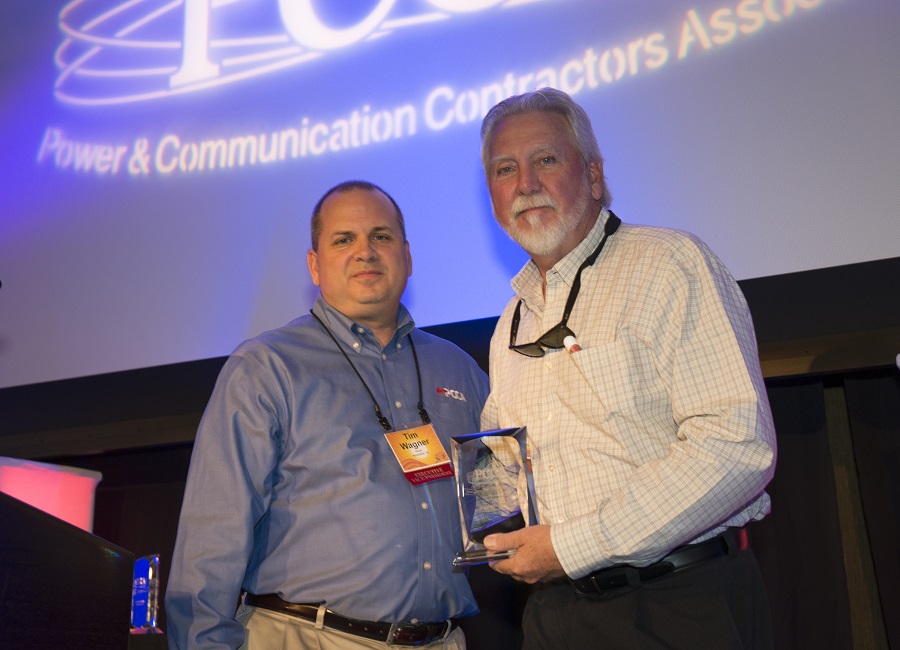 Steve got his start in the construction business at age 19 as a Central Office Equipment Installer for the Western Electric Company in Indianapolis, Ind. "I realized I was in the business for good several years later when I left Ma Bell and hired on with Page Engineers as a field employee," he recalled. "I got to travel to exotic places like Minnesota and Wisconsin and make what I thought was lots of money. I loved it!"

Bonneville Construction Co., Inc. started in Bonneville County, Idaho, by Robert Bauchman in the late 1940s. The company followed the REA Loan Program from rural electrical work into the telephone program, and in 1984, the company went to Puerto Rico for telephone projects.

"I started with Bonneville as their Project Manager on the Puerto Rico projects," Steve said. "In the late 1980s Stephen Bauchman bought out his father, and in 1992 Stephen and I became full partners in Bonneville Construction, S.E."

Bonneville, S.E. works mainly in Puerto Rico and the U.S. Virgin Islands. "We have dedicated ourselves to staying at the forefront of fiber optics," Steve said. "Fiber has lead us into CATV, CCTV, airport security work, intelligent highway, intelligent building, overhead ground wire (OPGW), shore ends of submarine cable landings, as well as metro networks and standard bread-and-butter long-haul fiber optic telephony applications. We started as ditch diggers, and while we still do that, we have evolved into a technology company."

According to Steve, the company's goals are fairly simple. "First is to do be the best in our region at what we do," he said. "Second is to do a proper job for our customers, win or lose. Third is to survive by staying in front of the technology curve."

Spears speaks proudly of Bonneville's accomplishments, including several "first" projects. The company landed the first submarine fiber optic cables on St. Croix, St. Thomas, and Puerto Rico and also did the first fiber loops in the Virgin Islands. Bonneville did the first turnkey design/build metro loop project in Puerto Rico, which connected the Governor's mansion in Old San Juan with the world via fiber optics. The company also did the substation and fiber splicing for Henkels & McCoy on the first OPGW project in Puerto Rico. Bonneville built Puerto Rico's first Intelligent Highway System to control traffic and parking for the "Regatta 2000" tall ships sailing event in San Juan.

Steve also makes time for kicking back and enjoying life and for working in his community. "Flori and I are active supporters of the Boy Scouts, little league baseball, the YMCA, and other charities," he said. "We have both been very fortunate. We both come from modest backgrounds, and our good fortune has allowed us the opportunity and the obligation to give back to our community."

That involvement extends to the local construction community as well. Steve is active in the local AGC chapter and is Past President of its Telecom Committee. He is also a past Communications Chapter Chair for the IEEE, Region 9.