PCCA inducted Austin Shanfelter into the PCCA Hall of Fame on March 7, 2015, during the 70th Annual PCCA Convention in Aruba.

Austin Shanfelter has been attending PCCA conventions for some 25 years now, but he can still remember his very first one and the impression it made on a young, up-and-coming contractor. "It was 1991 in Orlando, Max Clark's 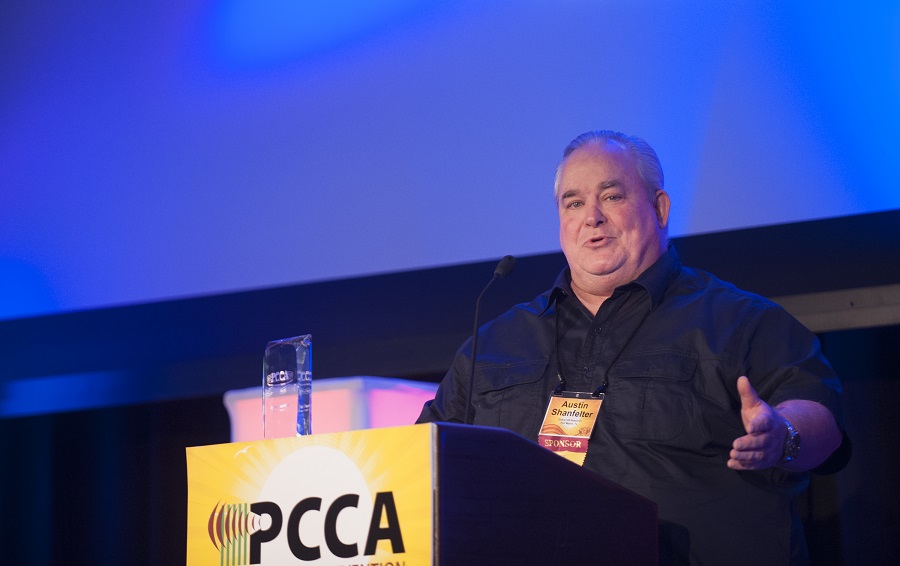 convention, and I was immediately impressed with the people associated with PCCA," he said. "I noticed how people conducted themselves and reached out to members like myself, and I realized that PCCA was a great way to network with these people and educate myself about the industry."

"A lot of people helped me back then, and they're still helping me today," he said. "Our association is full of wonderful people that you can truly learn from."

That networking and education certainly paid dividends over the years, as that young, up-and-coming contractor eventually became President and CEO of industry titan MasTec North America and PCCA President in 2006-07.

Like many PCCA members, construction is in Shanfelter's blood. "My father was a journeymen liner for Niagara Mohawk, and then for the New York Power Authority in the 1950s and '60s," he said. "In the late 1960s and early '70s, he began building some of the first generation cable systems in New York, Pennsylvania, and New Jersey."

Austin started in the cable business around the age of 15, working for his father as a lineman throughout his high school years. He learned valuable lessons back in those days: "hard work, honesty, treating people fairly  some of the old basics," he said. "First and foremost, my father was my role model, and he mentored me until the day he passed away. For that, I will always be extremely grateful."

During his years running Shanco, Shanfelter was introduced to PCCA by Frank Christian, and he began meeting people, learning things, and making decisions that would further shape his career. "The industry was going though a lot of major changes when I joined," he said. "HDD (horizontal directional drilling) was becoming a daily activity, and at PCCA meetings we were having first-generation HDD dialogues with vendors and contractors about products and processes."

In 1997, Shanfelter sold Shanco to MasTec North America and became the company's Broadband Group President. In 2000 he became Chief Operating Officer, and in 2001 he was named MasTec President and CEO.